Our previous post shared the moments leading up to our sweet baby entering the world, and ended with the nurse coming in to tell us that Dr. Maximos was on his way in to talk with us about a c-section.

Once Dr. Maximos arrived, he told us he really wasn’t comfortable letting me labor any further because my blood pressure was so high and unstable…

He said if you believe in God, like he did, then everything would be fine. At that moment I felt this incredible feeling that I needed to ask him to pray with us, but I didn’t. Everything and everyone was moving so fast the opportunity passed so quickly.

I remember the nurses coming in and prepping me, and feeling so numb and angry at the same time. I remember sobbing hysterically into Kason’s arms, and being so scared. What if I died in surgery, what if she died, what if something else happened. I was truly terrified. We then prayed before they began to wheel us back, I think…

I remember being wheeled down the hallway to the OR, and just crying. It was no longer an ugly sob, but a soft, quiet, defeated cry.  I could hear the nurses around me chatting and being so upbeat and carefree, I thought to myself  “don’t y’all know I’m about to be cut open?! this wasn’t part of the plan!”

We got to the OR, and they wouldn’t let K go in with me until after the epidural was placed. No one told us this beforehand so that was frightening. They said we would only be apart for 10 minutes tops, but it seemed like so much longer. K’s account of those moments of what he went through break my heart. The nurse assured him she would be right there with me during the epidural, and he could come in as soon as possible.

Once we got into the OR, I remember thinking how bright it was. And small. And cold. They stood me up so I could get onto the operating table, which looked as though it was 8″ wide. I felt so weightless and empty in a weird way. It was the most bizarre feeling. I sat on the table and the nurse who had been with me all day told me what to do: round my back and bend forward slightly, be very still. I did this as she stood in front of me and held my shoulders and upper body.

It was in that moment I had to surrender completely. I literally could not control the situation any longer. My fight was over and there was nothing I could do change the outcome. God was in control and He was working through the doctors.

I could hear the anesthesiologist behind me, he had such a kind voice as well. He almost sounded like what I remember my dad sounding like. The nurse told me I had the best anesthesiologist, and that she wasn’t just saying that; if she was having surgery right then she would want him as well.

They told me I would start to lose feeling in my lower body and that happened almost immediately.

Everything was moving so fast, and everyone in the room seemed to be in such a rush. I tried so hard to just go within myself and stay as calm as possible. I had no more tears left to cry, nor the energy to cry them if did.

Soon after, K came in and did his best to comfort me even though he was scared as well.

There was another nurse by my head who was watching my temperature and put a huge black sticker on my head to monitor it.

Then I heard Dr. Maximos and the consulting doctor who saw me originally. I remember that I wasn’t thrilled he was in there, and was even mad about the fact he ended up being right about everything. The pre-eclampsia diagnosis, having to deliver her early, and especially that I had to have a c-section.

But those feelings lasted mere moments, all I cared about at that point was Kerrington and I being safe.

I mentioned above that the operating table was so narrow, but there were also side pieces that went out perpendicular for your arms to rest on, straight out to either side. I couldn’t help but picture Jesus with His arms out and being nailed to the cross for our sins, gave me a strange sense of peace. There was something so surreal about that for me.

It was loud in there, but so quiet at the same time. Dark, but so incredibly bright (literally). I was desperately trying to find beauty in what I felt was such an ugly situation.

I kept trying to close my eyes, and find more inner strength, but every time I did K freaked out! He would say, “Tamara, Tamara!! Are you ok?” I can’t help but laugh a little now, poor guy, he was so worried.

The tugging and pulling as the surgeons were working was pretty intense. No pain, but again a strange feeling. I have kind of blocked this out I think, but I do remember wanting to ask them not to forget anything in there. Ha!

Then seconds later, we heard Kerrington Snow for the first time! Kason was able to get a couple pictures before they whisked her over for the NICU nurses to check on her. 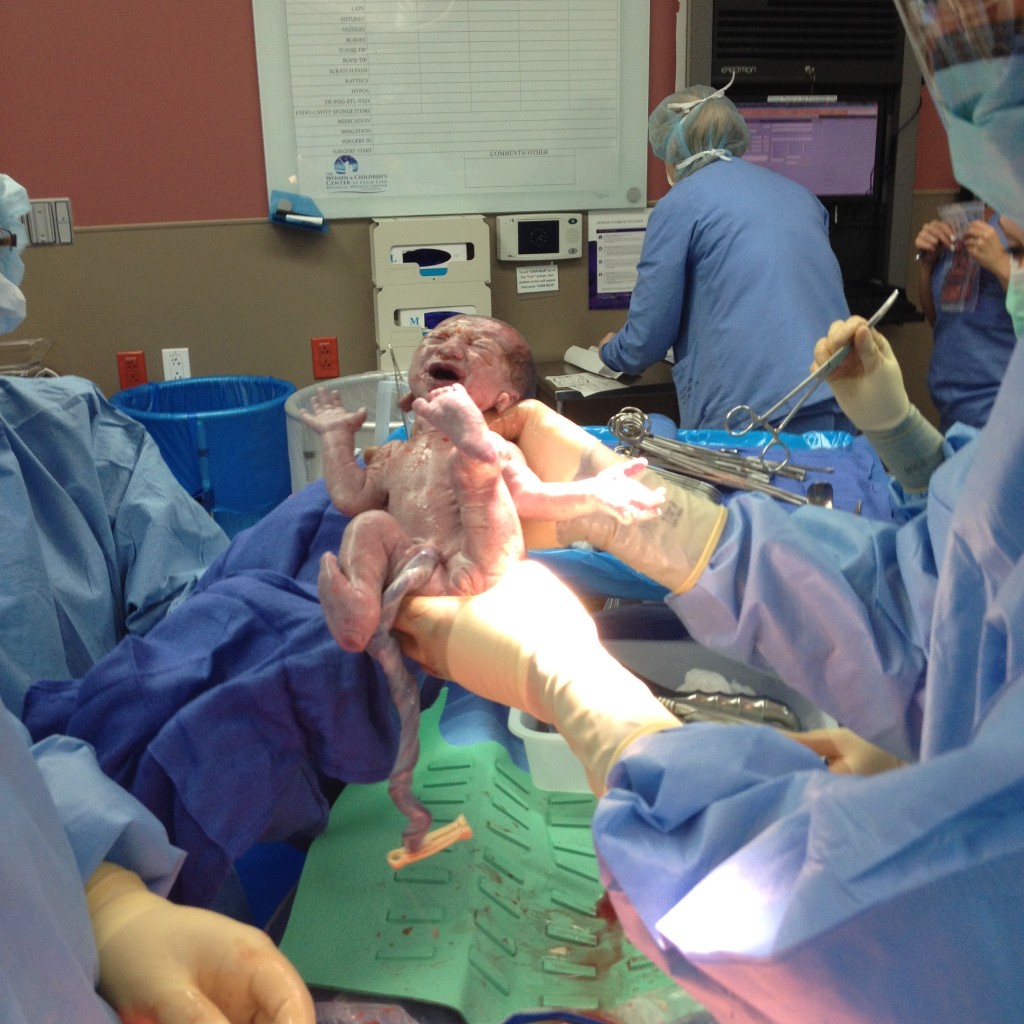 They had prepared us that she most likely wouldn’t be breathing on her own, she would have to be on oxygen, that I wouldn’t get to see her until much later, and a whole bunch of other scary things. But she came out wailing! Praise the Lord! They gave her oxygen I think only momentarily because she was perfectly happy breathing room air! God is so good!

After another couple minutes, while I was still trying to stay within myself and keep from feeling nauseated, I hear from behind the blue sheet, “Do you work out?” I said, “yyesss?” in a why are you asking me that kind of way! Dr. Maximos responded that because my muscles were so strong and taut he didn’t cut them, he was able to only move them to the side during the surgery. I remember thinking score! Maybe all those years of core workouts will be evident again someday! 🙂

Then, finally, they brought baby girl to me before taking her to the NICU, video is below!

It wasn’t until much later that night when I got to hold her for the first time, and oh my goodness it was amazing.

I honestly don’t remember much in between surgery and seeing her, except crying, a lot. However, we are so thankful we were both healthy. And so grateful to Dr. Maximos, Clear Lake Regional, and every staff member who took care of us!

So there you have Part 1 and Part 2 of Kerrington Snow’s birth story!